THE DECLINE OF VIRTUE

It is a great pity that the Latin language is now considered dead. Through its death, we have lost many of the Latin words, expressions, and maxims that provided us with great wisdom and poetry. Among these is the phrase, “Panem et circenses”, or, in English, “bread and circuses.”

Panem et circenses refers to a society that uses food and mindless entertainment to keep control of its people. Such a culture does not encourage deep thought, nor does it encourage any search for meaningful or consequential in life.

What an excellent way to describe modern society and the culture that it has produced. No longer does our culture celebrate those with intelligence, moral piety, or depth of character. Instead, society has chosen to celebrate exhibitionism and licentiousness as the height of moral fortitude.

But it’s hardly fair to criticise them. They have merely capitalised on the desire many people have to live a life of glamour and luxury. The Kardashians have been able to make tens-of-millions-of-dollars through their various reality TV shows, various business ventures, modelling, product endorsements, clothing lines, and more.

Not today, though. Today, the Kardashians have been able to build their empire, and it is an empire, upon shameless exploitation, self-aggrandisement, and self-promotion. They are able to reach nearly a billion people through social media and have been frequent guests on television talk shows.

What the Kardashian-Jenner phenomenon reveals is just how shallow our society has become. People have come to treat supermodels, reality TV stars, and sport’s stars as though they are royalty. The problem with this is that it encourages people to do whatever they like for a little bit of attention.

What all this boils down to is a loss of virtue. We have replaced the old heroes, the ones who encouraged courage and chivalry, with new Gods that encourage self-centredness and licentiousness. Self-expression is no longer to be expressed through the sweat of one’s brow, the depth of his character, or the faculties of his reason. Instead, it can be gained, quite easily, by posting a selfie on Instagram or Facebook.

St. Augustine defined virtue as ‘ordo amoris’ (yet another beautiful Latin maxim), or ‘order of love.’ It was his belief that every object and entity was accorded the level of love and affection that was appropriate for it to receive.

What we have today is a society that has gotten that order wrong. When people no longer honour Kings, they worship movie stars, musicians, models, reality TV stars, prostitutes, scoundrels, and gangsters instead. As C.S. Lewis wrote: “We make men without chests and expect of them virtue and enterprise. We laugh at honour and are shocked to find traitors in our midst. We castrate and bid the geldings be fruitful.” 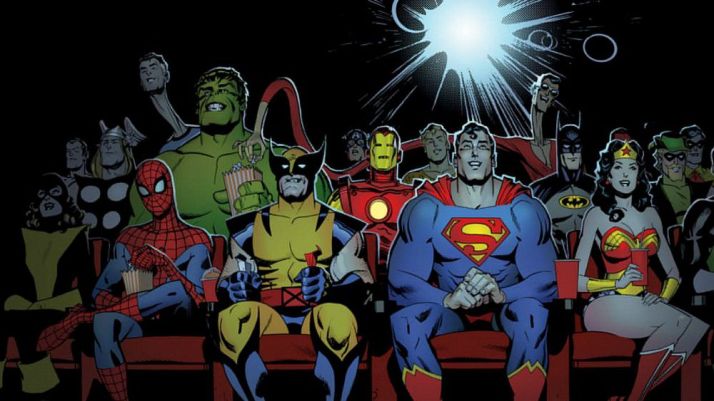 In an interview with the Radio Times, British actor Simon Pegg bemused on what he considered the infantilism of western culture. “Before Star Wars, the films that were box office hits were the Godfather, Taxi Driver, Bonnie and Clyde and the French Connection – gritty, amoral art movies”, Pegg commented, “then suddenly the onus switched over to spectacle and everything changed.”

Pegg continued, “now, I don’t know if that is a good thing. Obviously, I’m very much a self-confessed fan of science fiction and genre cinema. But part of me looks at society as it is now and just thinks we’ve been infantilised by our own taste. Now we’re essentially all consuming childish things – comic books, superheroes… Adults are watching this stuff, and taking it seriously!”

Perhaps this cultural shift is a sign of a greater decline into mass infantilism. The idea isn’t as ridiculous as one may think. The philosopher and cultural theorist, Jean Baudrillard, noted that the dominant forces in society often infantilize people to keep them pliable. And there is certainly a part of our personalities that longs for the innocence of childhood. As Stephen Fry commented in an interview with Dave Rubin:

“Nobody wants to believe that life is complicated, this is the problem. I suppose you might call it ‘the infantilism’ of our culture. There is deep infantilism in the culture and that extends in terms of the way they (people) think. They can’t bear complexity. The idea that things aren’t easy to understand, that there’s an um but there’s an ah, you have to think, there are gradations. No one wants that. They want to be told or they want to be able to decide and say ‘this is good, this is bad, I’m saying so. Anything that in any way conflicts with that is not to be born’.”

Today, the highest plateau of popular culture is ‘teen culture’. Hence our culture has become infused with completely vacuous entities: the Kardashians, Ariana Grande, Justin Bieber. Many adults are fans of child and adolescent fiction writers: J.K Rowling, Stephanie Meyer, and the like. In her book, the Death of the Grown-Up: How America’s Arrested Development is Bringing Down Western Civilization, author Diana West commented: “these days, of course, father and son dress more or less alike, from message-emblazoned T-shirts to chunky athletic shoes, both equally at ease in the baggy rumple of eternal summer camp. In the mature male, these trappings of adolescence have become more than a matter of comfort or style; they reveal a state of mind a reflection of a personality that hasn’t fully developed, and does want to – or worse, doesn’t know how.”

More alarming, however, is the inherent infantilism evident in youth politics. Like insolent children, these youths throw temper tantrums anytime anyone dares to question their precious, and false, worldview. Ultimately, when these progressive young people back a cause it is to attain ‘street cred.’ They become social media crusaders. But those among their ranks willing to take up arms and lay down their lives for their cause is vanishingly small. These pathetic little snowflakes feel traumatised whenever someone has the tenacity to disagree with them (of course, they have no problem with intimidating those who disagree with them).

And colleges and universities encourage this kind of behaviour! The official guidelines at Oberlin College in Ohio suggest that lectures avoid using ‘triggering’ materials. University safe spaces give special, snowflake students the option of hiding from dissent. Similarly, many young people complain of ‘microaggressions’: small words and actions that are considered harmful despite their lack of malicious content. But in most cases, these measures are forms of oppression disguised as benevolence. They are a means of silencing voices of dissent.

Don’t allow yourself to be seduced by this cult of infantilising escapism. Instead of watching Transformers try watching Schindler’s List, instead of reading Twilight try reading Macbeth or Hamlet, and rather than hiding behind your safe-spaces, trigger warnings, and micro-aggressions try listening to what the other person has to say. Who knows? Maybe you might learn something.