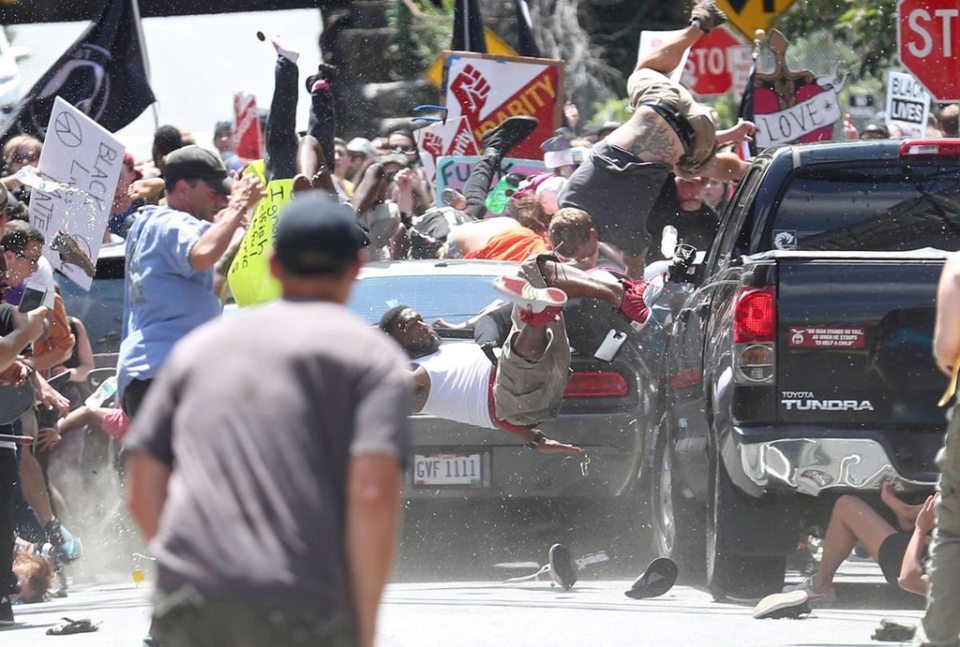 A thirty-two-year-old woman has been killed, and nineteen others have been left with minor to life threatening injuries in Charlottesville, Virginia, after a day of protests between white nationalists, calling themselves “unite the right”, and counter-protesters culminated in violence.

The counter-protesters were reportedly celebrating driving the white supremacists from Emancipation Park when the attack occurred. Video footage shows a Dodge Charger accelerating into a crowd of counter-protesters. One witness claims the car was travelling at forty-miles-per-hour (sixty-four-kilometres-per-hour). Another witness, Brennan Gilmore, told NBC news:

“It was very clearly intentional. From the far end of the street, it accelerated, slowed down right before the crowd and then slammed on the gas through the crowd sending bodies flying. And then it reversed back into the street dragging bodies and clothes.”

After the incident, the driver reversed the car at high speed and fled the scene.

“We condemn in the strongest possible terms this egregious display of hatred, bigotry, and violence on many sides, on many sides. It’s been going on for a long time in our country. There’s no place in America (for this). What is vital now is a swift restoration of law and order and the protection of innocent lives.”

“We ALL must be united & condemn all that hate stands for. There is no place for this kind of violence in America. Let’s come together as one!”

“I stand with @POTUS against hate & violence. U.S is greatest when we join together & oppose those seeking to divide us.”

“Our country encourages freedom of speech, but let’s communicate w/o hate in our hearts. No good comes  from violence.”

Governor of Virginia, Terry McAullife, declared a state of emergency around Charlottesville which began at noon. Police, meanwhile, are treating the incident as a criminal homicide investigation. They have arrested the driver of the car, James Alex Fields, Jr., and are holding him on a variety of charges, including second-degree murder and malicious wounding.

McAullife directed a statement to the white supremacists, saying:

“You came here today to hurt people. And you did hurt people. My message is clear: we are stronger than you.”

He went on to say:

“I have a message to all the white supremacists and the Nazis who came into Charlottesville today:  My message is go home. You are not wanted in this Commonwealth. Shame on you … You are anything but a  patriot.”

Police Chief, Al Thomas, has backed this up, stating that “premeditated violence that our community experienced today was completely unacceptable.”