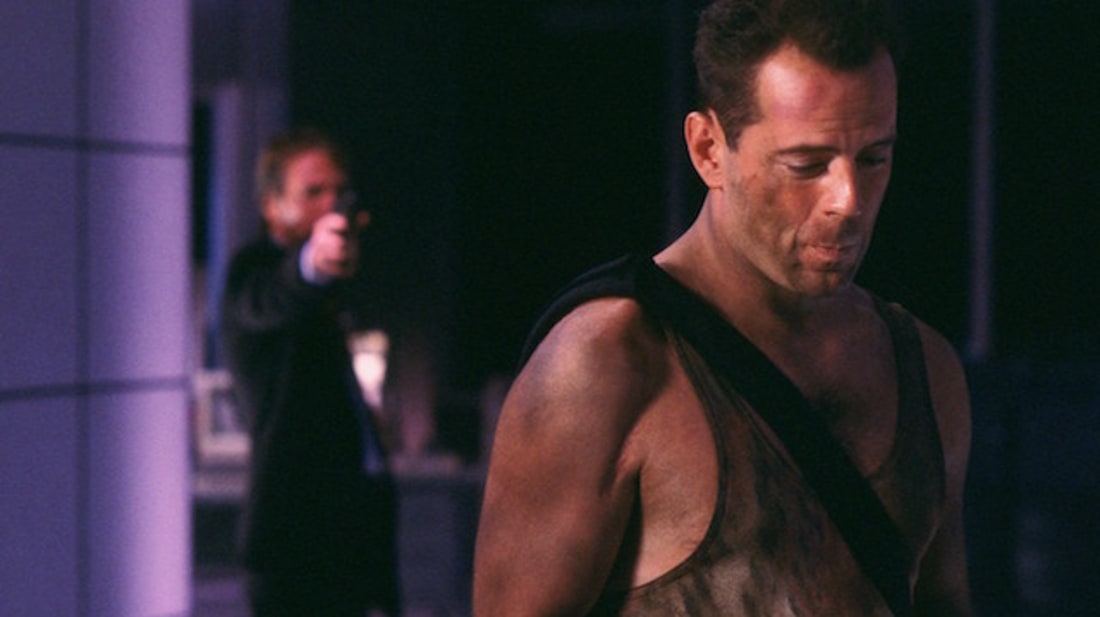 It would not be controversial to claim that Die Hard is one of the most influential action films of all time. With its perfectly constructed story and charismatic characters, Die Hard has remained popular over three decades after its initial release. Whilst it may be easy to chalk this success up to a mere quirk of fate, I believe it is a result of its careful use of plot and character.

The first thing worth noting about Die Hard is that it gets the rudimentary aspects of cinematic storytelling right. The stakes are raised at very precise moments giving the film a very measured pace. Furthermore, Die Hard adheres to the old adage “show, don’t tell.” Director John McTiernan gives the viewer small snippets of information which they can use to tell themselves the story. This makes the movie far more satisfying because it makes the viewer feel like they are participating in the action.

The second thing worth noting is that Die Hard was intended to be a fun, joy-filled Christmas movie. Ludwig van Beethoven’s “Ode to Joy” runs as a musical theme throughout the film. Themes of family, reconciliation, and redemption occur over and over again. Finally, the opening of the vault, caused inadvertently by the FBI, is treated as a kind of Christmas miracle. It is impossible to watch Die Hard without having a good time.

The third thing worth noting is the magnificent array of memorable characters that Die Hard boasts. The film’s hero, John McClane is an ordinary, flesh-and-blood human being – a far cry from the muscle-bound action heroes of the 1980s. He is the wise-cracking descendant of John Wayne or Gary Cooper who has had to face his fear of flying in order to travel to Los Angeles and repair his relationship with his wife, Holly. What makes McClane so endearing as a character is that he never allows himself to be beaten, no matter how seemingly insurmountable the obstacles placed in front of him.

Finally, there is Hans Gruber, played to perfection by the Shakespearean actor, Alan Rickman. On the one hand, Gruber is a coldly-calculating sociopath who has not only planned every aspect of his scheme down to the necessity of the FBI’s involvement, but also a quick thinker capable of adapting to any change in situation. On the other hand, he is a pretentious narcissist with a penchant for expensive suits and misquoting Plutarch (“when Alexander saw the breadth of his domain, he wept, for there were no more worlds to conquer”). Yet regardless of Gruber’s flaws (or, perhaps, strengths), we cannot help but want to be a member of his crew.

Die Hard has remained one of the most popular action films of the past thirty-five-years because it got the basics right. First, it is a joyous, Christmas movie that makes the audience feel like they are a part of the action. Second, every character, from Al Powell and the henchman to Gruber and McClane, are all memorable. Storytellers have much to learn from Die Hard.