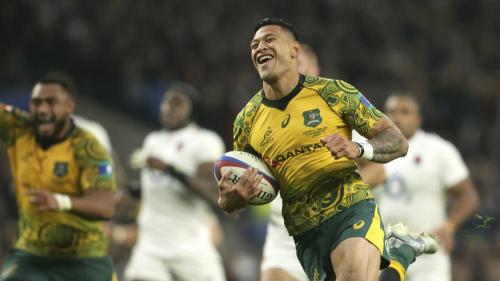 Former rugby player, Israel Folau and his lawyers are seeking up to AuS$15 million (including Aus$5m for the irreparable damage done to Folau’s reputation) from Rugby Australia. Folau had had his contract with Rugby Australia terminated after he was found guilty of a high-level breach (the only kind that can result in termination) of their code of conduct. This high-level breach came from Folau’s decision to post a picture on Instagram stating that hell awaited “drunks, homosexuals, liars, fornicators, thieves, atheists, and idolaters.”

Having failed to reach a settlement with Rugby Australia at a Fair Work hearing, Folau and his lawyers have moved their case on to the Federal Court. Folau himself has merely expressed his desire for Rugby Australia to admit they terminated his contract because of his religious beliefs. In a video, Folau stated: “Hopefully, Rugby Australia will accept that my termination was unlawful and we can reach an agreement about how they can fix that mistake. First and foremost, I am hoping for an apology from Rugby Australia and an acknowledgement that even if they disagree with my views, I should be free to peacefully express my religious beliefs without fear of retribution or punishment.”

According to Rugby Australia’s, Folau’s contract was terminated on the basis that he had violated their requirement to “treat everyone equally, fairly and with dignity regardless of gender or gender identity, sexual orientation, ethnicity, cultural or religious background, age or disability.”

Of course, what really lies at the centre of the Folau case is not homophobia, but freedom of speech and freedom of religion. It is really a question of whether Israel Folau should be allowed to express his religious views without suffering economic or judicial penalty.

“Freedom of speech is an essential aspect of the rule of law and ensures there is accountability in government. People must be free to express their opinion about the content of laws, as well as the decisions of government or accountability is greatly reduced. Freedom of expression is a boarder term which incorporates free speech, the right to assemble, and other important ways of expressing ideas and opinions. The balance the law of Australia strikes between protecting and restricting freedom expression generally is very important to understand the health of the rule of law in Australia.”

It is remarkable to note, however, that freedom of speech is protected by neither the Constitution of Australia nor by Federal Legislation. In fact, there is a wide array of laws and regulations that place legal restrictions on expression. One cannot publish military secrets, incite criminal activity, or defame or libel another person.

Rather, freedom of speech is considered a common-law right adopted from the Westminster system. It is a feature of our political and legal traditions. The Australian High Court has stated that there is an implied right to freedom of expression embedded in the Australian Constitution (they did not say anything, however, about non-political expression). Likewise, Australia is also a signatory of the International Covenant on Civil and Political Rights which lists freedom of expression as a fundamental right.

Commonwealth not to legislate in respect of religion

Similarly, freedom of religion is protected by Australian case law. In the case of Church of the New Faith v. Commissioner for Payroll Tax (Vic), the Judges Mason ACJ and Brennan J. commented: “freedom of religion, the paradigm freedom of conscience, is the essence of a free society.” Similarly, in the case of Evans v. New South Wales, the Federal Court decreed that religious freedom as an “important freedom generally accepted in society.”

The road to hell is paved with good intentions. A decision that favours Rugby Australia will give large organisations the legal mandate to bully and intimidate those that don’t agree with their views. If Australia’s Federal Court truly believes in freedom, it will uphold Israel Folau’s right to freedom of speech and religion, and rule against Rugby Australia.

By themagus1992 in law, Politics, society on August 20, 2019.
← On Constitutional Monarchy Is Our Lifestyle Killing Us? →