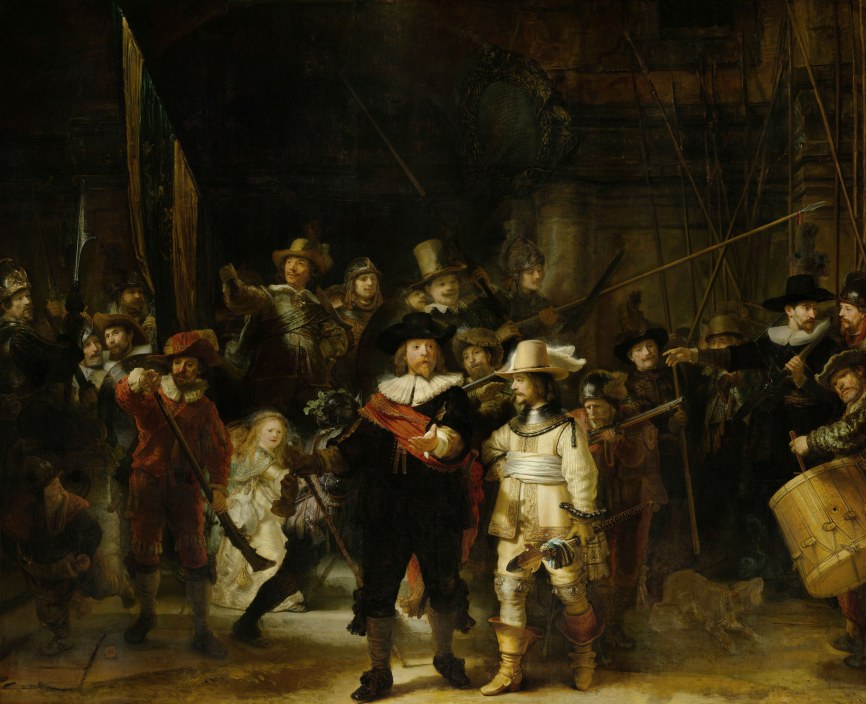 “The Night Watch” represents a style of painting that was unique to Holland and the northern Netherlands during the 17th century: the Schuttersstuk. Furthermore, Rembrandt’s rendition is, in and of itself, a highly original rendition in that it does not rely upon the typical rows of figures common to the style. Instead, Rembrandt’s painting featured animated subjects engaged in the various duties and responsibilities of the Civic Guard.

Painted using oils on a 142.9 by 172.0-inch canvas, “The Night Watch” is Rembrandt’s largest painting. Despite its title, the painting is actually set during the day. The reason the painting’s background looks so dark is that the varnish Rembrandt used darkened over the years. It was restored to its original glory in the 1940s, but the name “The Night Watch” stuck. On a side note, it is interesting to observe Rembrandt’s well-known use of the technique ‘chiaroscuror’ (Italian for ‘light-dark’) which uses light and dark to create dramatic contrasts and a sense of three-dimensionality.

Painted during the Dutch Golden Age, Rembrandt was commissioned to create the painting by the Kloveniersdolen – the guild hall of the Amsterdam Civic Guard Company of Musketeers. In the Netherlands, Civic Guardsmen were tasked with the defence of their cities, the maintenance of law and order, firefighting, and forming a strong presence during festivities and parades for visiting royalty. Each company of Civic Guardsmen had its own guild hall decorated, according to tradition, with group portraits of distinguished members. These portraits were designed to evoke a sense of affinity between the members of the company and asserted their power and status within the cities they protected.