ESPN Vice-President, Jon Skipper has sought to set the record straight on the decision to remove Asian-American sport’s commentator, Robert Lee from the coverage of a sport’s game in Charlottesville, Virginia.

The decision to remove Lee occurred because it was believed his name, which bears a resemblance to the Confederate General, Robert E. Lee, would cause some offence.

In a memo obtained by CNN, Skipper attempted to explain why the controversial decision was made: 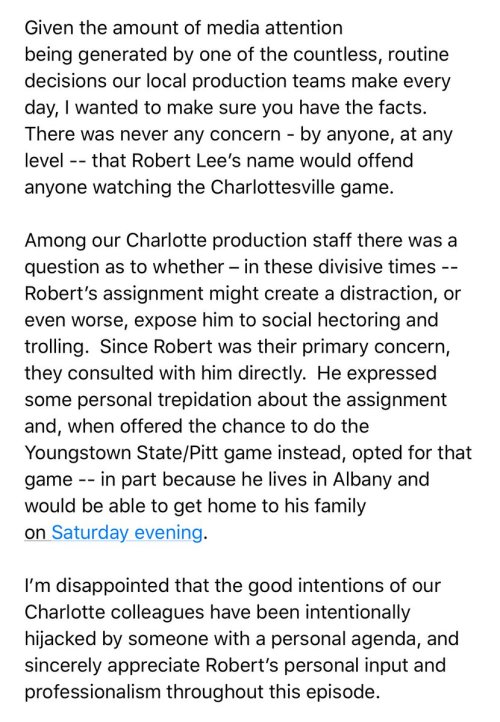 Skipper has received some support for his decision. In an op-ed, a former ESPN Vice-President, Roxanne Jones, defended the decision to remove Lee from the broadcast, writing:

“We want to pretend that sports are a safe sanctuary from the world’s ugly problems, but that has always been a farce. Truth is, not even the glorious game of football can keep America’s toxic culture of bigotry,  hate and violence at bay. It’s just too heavy a burden.”

Others, however, have been quick to criticise the network’s decision. Fox News’ Brit Hume has commented that the second paragraph of Skipper’s memo contradicted the first. Hume noted that if there was no concern that Lee’s name would cause offence, there would be no reason to presume it would be a distraction.

By themagus1992 in culture, Politics, society on August 25, 2017.
← TRUMP THREATENS A GOVERNMENT SHUTDOWN NOW IS THE WINTER OF OUR DISCONTENT →