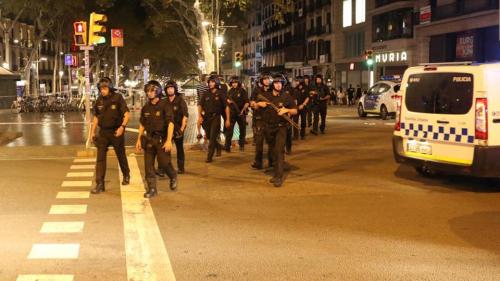 A terrorist attack in Barcelona has left at least thirteen people dead and more than fifty others injured.

The attack occurred when a white van careered onto the historic Las Ramblas Street street and drove five-hundred metres down the busy walkway. One witness told the BBC that the van was “weaving left and right, trying to hit people as fast as possible.” People ran from the area in fear of their lives.  The driver fled the scene leaving victims covered in blood and writhing in pain from broken limbs.

“There was a loud noise and everybody ran for cover. There were a lot people, lots of families [at the site], this is one of the most visited sites in Barcelona. I think several people were hit. It was horrible, there was panic. Terrible.”

“I turned around and people were screaming — I could see a woman screaming with her kids —  people started running and jumping into shops. I ran for about 50 or 100 metres and stopped to see what was happening. The police were very quickly on the scene and getting people to move back. I could see chaos right at the top area and I spoke to a shopkeeper who had run down and was screaming. He was Bengali so I spoke to him in Urdu and he said a van had driven  into a crowd and he thought there were five to six people very seriously injured.”

Islamic State has claimed responsibility for the attack. According to Catalonia’s Regional President, Carles Puigdemont, two suspects have been arrested in connection to the attack.  Josep Lluís Trapero,  chief of Catalonia’s regional police, confirmed Puigdemont’s statement, but was quick to point out that the two men arrested were not the perpetrators of the attack:

“Two people have been arrested in relationship with this crime. That doesn’t necessarily  mean they carried out the attack in Barcelona but, yes, they are linked to the incident.”

Nihad Awad, the executive director of the Council on American-Islamic Relations, has condemned the terrorist attack.  President Trump, tweeted: “The United States condemns the terror attack in Barcelona, Spain, and will do whatever is necessary to help. Be tough and strong, we love you.” Similarly, King Felipe of Spain tweeted: “They are murderers, simply criminals who are not going to terrorise us.

By themagus1992 in law, Politics, society on August 18, 2017.
← ICELAND’S EXTERMINATION OF DOWN SYNDROME BABIES BANNON BOOTED FROM WHITE HOUSE →